The Revolution Will Be Live: African American Literature and Spoken Word Poetry 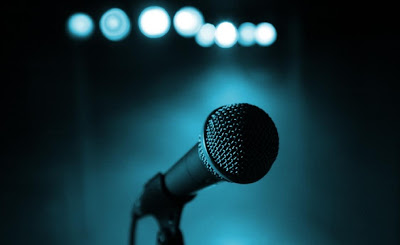 As I continue to research various poems and poetic texts, I am continuously inspired to discuss African American poetry’s impact on the public sphere as well as within Literature and the Humanities. As an African American poet who enjoys experimenting with both the written and the spoken, my research continues to examine the ways in which “the contemporary landscape of poetry reflects a paradigmatic shift away from the prevailing model of written and/or academic poetry and more toward spoken word poetries (Why Study African American Literature)”.

Email ThisBlogThis!Share to TwitterShare to FacebookShare to Pinterest
Labels: Poetry 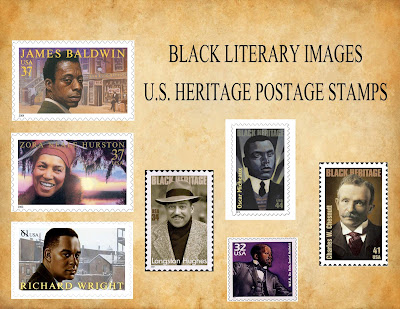 The different renderings of these artists and artistic background of each stamp represents an aspect of each of the novelists personalities. For instance, the cityscape behind James Baldwin seems to suggest a connection to Harlem and New York in general. In a similar fashion, W.E.B. DuBois is looking off at a distance similar to his character poses. Therefore, taking the visual representations of these writers into consideration is important given the manner in which they have been framed in the public’s historical imaginations through these stamps. 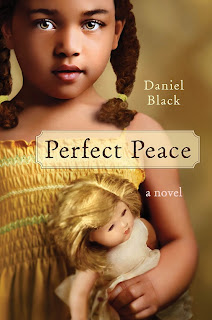 In Perfect Peace (2010), contemporary novelist Daniel Black poses a series of interesting questions: What is gender? How is it constructed? What if a backwoods mother of six boys raises her seventh boy as a girl? And what if she convinces everyone that he (she) is a girl?

In 2011 at the African American Sexualities Conference at Penn State, I asked Black a very simple question: How did you think of this story? In a self-deprecating tone so endearing to his personality, Black chuckled to himself and replied with a smile, “It just seemed like a fun thing to write about. I am a storyteller first. And whenever identity is manipulated in a way that is counter-culture, you tend to get an interesting story.”

6 Texts That Aid in the Study of African American Literature 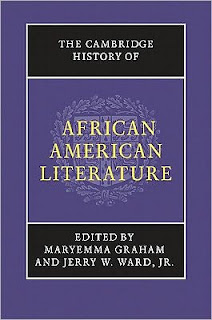 After returning from the College Language Association (CLA), I wondered what I should write blog about this week. I learned so many new things through networking and listening to my colleagues and professors speak, and I wondered how I could take all of it in and simultaneously offer knowledge to others.

And because The Project on the History of Black Writing is dedicated to recovering and reclaiming literary contributions by African Americans as well as promoting an awareness of black authors, I’d compiled a list of a few books and essays that I find useful and encouraging as a creative and critical writer.

***Help Me Annotate on RapGenius. Read Post to find out how***

In “Public Service Announcement” Jay-Z raps, “Check out my hat yo, peep the way I wear it/Check out my swag' yo, I walk like a ballplayer.”

Jay-Z’s reference to “Swag” has deeper cultural roots for African Americans. Even though the word “swag” has been made wildly popular by rappers in recent years, back in 1934 Zora Neale Hurston was already theorizing about this concept in her essay “Characteristics of Negro Expression.” In Hurston’s essay, she explains the distinct ways that Black people have come to articulate and dramatize their lives through storytelling and other artistic practices such as negro folklore, imitation, and dialect. Similar to Jay-Z telling his listening audiences to “check out my swag’ yo,” Hurston noted the importance of a presence and persona as she explained:
Read more »
Posted by The HBW Blog at 9:04 AM No comments: 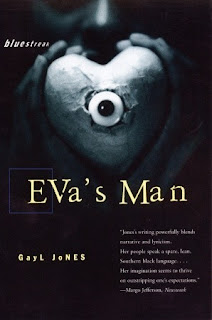 Gayl Jones’s Eva’s Man should be on more syllabi. I have found the novel to be not only the lesser read of Jones’s work, but also a seldom-taught text within Academia. Eva’s Man is chock full of material begging for analysis – material that also calls for intense introspection from its readers. If a syllabi brought you to this post, then good on your professor. But if you are just looking for a new book to read, then check out this list. I hope you are convinced to go buy or rent a copy!

Biomythography in the Life Narrative and the Poems of Audre Lorde 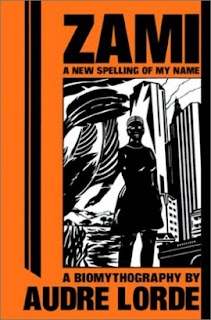 This semester, I am enrolled in Dr. Maryemma Graham’s “Life Writing: Contemporary Autobiography—Theory and Practice Course”. Many of the texts we have read this semester interestingly complicate the concepts of autobiography and memoir. For example, Audre Lorde refers to her life narrative as a biomythography. In “Self-Representation: Instabilities in Gender, Genre, and Identity,” Leigh Gilmore writes, “…self/life/writing—is exchanged for the terrain of biomythography” (27) in Zami.  That is, the text represents a space in which “homes, identities, and names have mythic qualities” (27). Examining her text closely, one can claim that biomythography is a combination of myth, history, and biography.
Read more »
Posted by The HBW Blog at 8:11 AM No comments:

To focus on black writing rather than black literature, it might be argued, is to attend with greater passion to dynamics of literacy within our culture.  As theories of modernism and globalization lead to camps of blissful forgetting, there is some urgency in ordinary instances of black writing. Obviously, a young person walking down a sidewalk on the way to somewhere as she or he practices “rapping skills” is creating pre-conditions for literature.  That young person may one day be viral on YouTube or have work published in a best-selling anthology.
Read more »
Posted by The HBW Blog at 9:33 AM No comments: 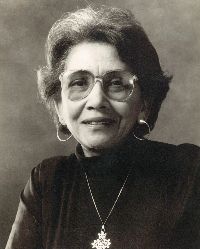 Twenty-five years ago, Naomi Long Madgett edited and published A Milestone Sampler: 15th Anniversary Anthology (Detroit: Lotus Press, 1988).  The book is a collector’s item. Pictured on the front cover are Lotus Press poets who participated in the fifteenth anniversary celebration in Detroit, June 25-27, 1987.The back cover informs us that

The press has held, as a major part of its philosophy,  respect for the independence of its black poets in their choice of style and subject matter.  As a result, its products demonstrate remarkable variety, determined not by editorial biases but by technical competence.
Read more »
Posted by The HBW Blog at 8:54 AM No comments: 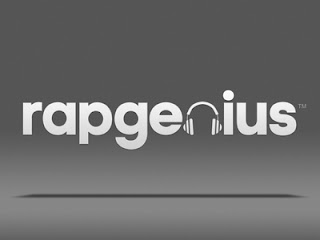 On yesterday, I posted a list of “7 Ways that RapGenius Assists Digital African American Literary Scholarship.” Today, I decided to do a follow up post to illustrate exactly what I meant by providing actual examples on the RapGenius website. RapGenius’s crowd-sourced, multimedia platform helps users to fuse social networking and online databases to create digital resources to study black writing. 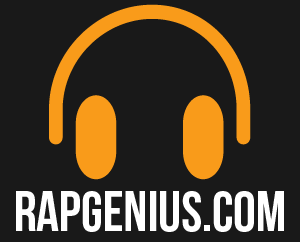 I said it once and I’ll say it again: Rap Genius is not just for Rap fans. In my post, Rap Genius and Black Literature, I wrote about how the website “helps clarify the importance of language usage, historical context, and thematic content in poems, speeches, essays, and novels.”

Rap Genius's growing online collection of black writers ranging from Langston Hughes to Nikki Giovanni aids in sparking conversations concerning black literature and serves as a valuable digital resource. In some respects, the site could be considered Cliffsnotes of the 21st Century by providing an interactive platform for engaging, summarizing, reading texts.

I have come up with a list of 7 reasons that explain the significance of crowd-sourced annotations to the study of Black Literature and digital humanities to encourage literature enthusiasts to become more interested in using Rap Genius: 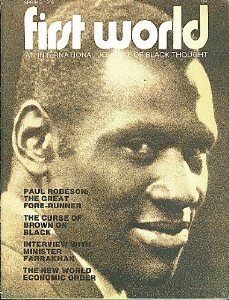 After Johnson Publications abruptly discontinued Black World in 1976, Hoyt W. Fuller and others founded First World Foundation in Atlanta and began to publish First World: An International Journal of Black Thought.  In The Black Arts Movement (2005), James Smethurst does not associate the demise of Black World and the birth of First World with Watergate (1974), but future studies of African American poetry will have to account for how the covert activities of Richard Nixon’s administration intensified divisions and decline within the evolving of Black cultural nationalism.

Post-Civil Rights assumptions about the aesthetic function of poetry beg to be explained within the total context of dwindling American faith in the credibility of democracy. The “formal turn” in black poetry after 1974, even if it is considered as a pure act of language (a specialized speech act), must be associated with a paradoxical resuscitation of faith in American exceptionalism. I want to sell signifying  tickets with the claim that young black poets born after 1965 consciously and unconsciously were determined in the late 1980s and early 1990s to prove they were more quintessentially “American” in craft than other poets in the United States, much in the fashion Ralph Ellison “proved” he was more American than Saul Bellow.
Read more »
Posted by The HBW Blog at 6:42 AM No comments: