The Gifts of Black Prisoners 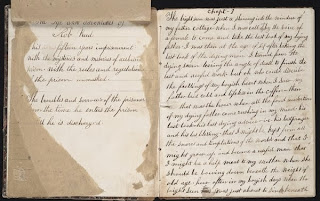 Just as DuBois's The Gifts of Black Folk (1924) is overshadowed by The Souls of Black Folk (1903), the long shadows of our classic slave narratives obscure the importance of studying other autobiographical forms in efforts to write more expansive histories of how African Americans have used literary and literature or black writing in English since the 18th century. Accidental "discoveries" of lost materials are special moments in the growth of scholarship, enabling us to enlarge the body of black writing and to conduct archival projects to refocus our perspectives. Julie Bosman's article Prison Memoir of a Black Man in the 1850s-NYTimes.com notifies us that a special moment is in the offing.

The Beinecke Rare Book & Manuscript Library's acquisition of Austin Reed's "The Life and Adventures of a Haunted Convict, or the Inmate of a Gloomy Prison," dated 1858, is a great find if the memoir is indeed authentic and not a parody written by a white prisoner or white prison guard in the 1850's by a person who wished to exploit the popularity of slave narratives. We do not need yet another example of bogus black writing. We are still in a state of uncertainty about whether Hannah Craft's The Bondwoman's Narrative is truly what we have been told it is. We do need a 19th century bit of prison writing that is beyond dispute, that can be analyzed in some framework of African American autobiography and set against the literary/non-literary qualities of, let us say, George Jackson's Blood in My Eye and Soledad Brother: The Prisoner Letters of George Jackson and other writings by the imprisoned (e.g. the early poetry of Etheridge Knight). It is better to err in the direction of extreme skepticism than to be duped.

Mirror of Violence: Charles Fuller's Zooman and the Sign 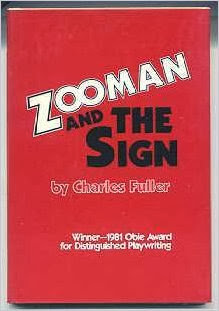 It is a truth, widely recognized, that blue-blooded and red-blooded Americans love violence. To be sure, it is deemed unpatriotic to detest violence, which along with "race" is a permanent fixture in the minds of Americans. Like esteemed works of ancient world literature, contemporary American literature idolizes violence. Literary and cultural critics who condemn violence in art and in life are naive candidates for mental asylums, because unquestioned embrace of violence is the sign of one's 21st century humanity. It is a deeper truth, however, that Americans are ambivalent about disregard for the sanctity of human life. They applaud it until one of their children is killed by another person's child. Tears of grief flow like waterfalls. Anti-violence protests sprout like mushrooms and people wear costumes of solidarity, then disappear when the next episode of violence begins on television, in sports stadiums and cinema, or goes viral on the Internet. We are paragons of human contradiction. 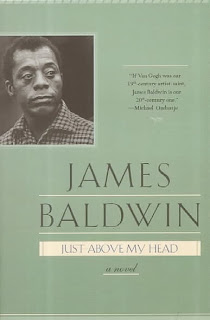 For quite some time now, I have been thinking critically about African American Literature and Religion. Drawing largely upon the works of James Baldwin, I have found this enterprise to be fascinating and complex. Given the historical context and religious experiences of black people in America, it is no surprise that traces of religion appear a great deal in black writing.

James Baldwin, Toni Morrison, Richard Wright, and Alice Walker are just a few names that come to mind when I think about the relationship between religion and philosophy of literature. All of these figures wrestle with the question: What can you say about god in light of human suffering? While Baldwin and Walker follow a more theological response, Morrison and Wright offers up humanism as a response to the problem of evil.

In a previous post, I argued that Morrison's The Bluest Eye challenge western theological constructs with its humanist slant. Today, I want to explore James Baldwin's Just Above My Head as this text wrestles with similar questions. Recalling a particular moment of his life while Arthur was living, Hall Montana says:

Amoebic Motion in Literature and Culture

Imagine that you have the good fortune of getting a job interview at the MLA Convention for a position as "Assistant Professor of African American and Diaspora Literature." You feel secure. You defended your dissertation on "Signifying and the Blues in the Detective Novels of Chester Himes" with honors. You have read Stuart Hall, Paul Gilroy, Gayatri Spivak, John Cullen Gruesser, and most of Edward Said's Culture and Imperialism. You are prepared to talk about postcolonial theory and the Diaspora. One member of the interview team asks how you would incorporate issues about Sinterklass? Zwarte Pieten? You are paralyzed as a deer staring into headlights. Crestfallen, you leave the interview, knowing you will not get this job. No one told you the Diaspora the search committee had in mind pertained to northern Europe. No one warned you about how different African American literature is from other ethnic-based literatures within the deliberately ignored arena of American literature's postcoloniality.

This hypothetical scenario is instructive. Many people who decide the fates of emerging scholars have given inadequate attention to undergraduate and graduate education; to teaching as teaching (holistic pedagogy); to the uncertain job market in our nation, and the impact of global political and economic changes upon the shaping of higher education, especially as it pertains to African American literature and culture. In advertising the position, the institution presumed that "Diaspora" had an Alice-in-Wonderland definition. No one asked what version of expertise in the Diaspora was most desired. Diaspora in Canada, Mexico, Central and Latin America (including Portuguese Brazil)? Diaspora in the Caribbean (Anglophone, Francophone, Spanish, and Dutch)? Diaspora in the UK and Europe (especially Germany, Italy, the Netherlands, and Scandinavia)? Diaspora means differently. This fact was not considered. Like the code term "people of color," it means whatever people of no color in a position to hire scholars want it to mean at any given moment.