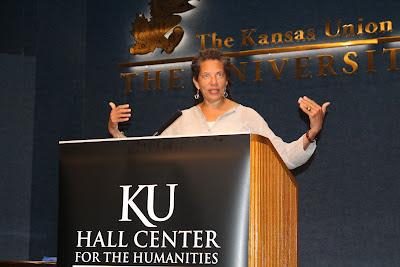 On September 6, 2012, the Hall Center for the Humanities hosted Dr. Nikky Finney. Her talk was entitled "Making Poetry in Our Anthropocene Age". Anthropocene is a scientific term coined to suggest that humans are the geophysical force changing the climate of the planet, and ushering in a new geological period.  The central question of Dr. Finney’s talk concerned the connections between the damage done to the earth's ecosystems and her role as a contemporary poet.

Prior to her talk, Dr. Finney was introduced by Dr. Paul Outka, Associate Professor of English at the University of Kansas. He gave a brief history of American environmentalism primarily based on his research in Race and Nature from Transcendentalism to the Harlem Renaissance.  During the introduction, he stated that cultural history of the racial fault line in American environmentalism is divided by largely white wilderness preservation groups and the largely minority environmental justice movement. With a racialized and polarized rift of American environmentalism firmly establish, the audience gazed at Dr. Finney. She was left to do the hard work, removing the racial tension and teach the audience about the consequences of collective actions in the Athropocene era.

Dr. Finney’s talk opened with a series of epigraphs. This series of epigraphs were extracted from the volumes of journals and personal notes that she has kept since she was a teen.  She affectionately called these volumes of journals field notes. One of four field notes quoted Lucille Clifton, “The earth is a black and living thing.”  Finney weaved this field note throughout her lecture about the Athropocene era.  This field note acted as a mending needle and transformed the polarized framing of American environmentalism. The weaving of the field note into the speech stitched together the racialized environmental rift that continues to threaten the collectivity and success of environmentalist efforts in the United States.

The stratification and marginalization of environmental efforts that were emphasized in the introduction  exaggerated the racial binary of American cultural identity. Finney’s refrain of ‘the earth is a black and living thing’ helped the audience make connections between their racialized understanding of American culture in context of environmental efforts and the positive consequences of our collective actions.

DaMaris B. Hill has a terminal degree in English-Creative Writing and Women, Gender, and Sexuality Studies at the University of Kansas. The majority of her poetry stresses connections. She is currently writing a novel about two parents’ struggle to control their daughter’s sexuality during the 1930s.
Posted by The HBW Blog at 1:35 PM