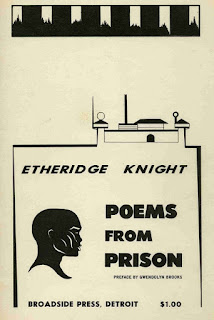 When Etheridge Knight autographed my copy of Poems from Prison (1968; 1st edition, fifth printing, March 1971), he wrote "Keep On! We gonna win." and signed his name "Imamu Etheridge Knight." By designating himself a spiritual leader , he positioned himself to remind me that some poets believe what they do pertains to mind, body, and spirit. His urging me to "keep on" could be related to many activities, especially to African and American imperatives. In the 1970s, those imperatives had something to do with cultural nationalism and teaching. His prediction that we will win something laid heavy weight on me and "all the other caged black cats everywhere" to whom he dedicated his book. And some caged tawny, white, and impractical cats were expected to share the weight. In the 1970s, a terrible beauty of optimism was frequently reborn.

or the final, African American haiku in a set of nine


and then discovered in the poem "It Was a Funky Deal" that what Knight had in mind was Malcolm's
assassination:


You rocked too many boats, man.
Pulled too many coats, man.
Saw through the jive.
You reached the wild guys
Like me. You and Bird. (And that
Lil LeRoi cat.)


The poems trigger sensations that depend on locating the poet's language in realms of one's lived experiences as well as one's acquired knowledge of social and cultural operations. In 2016, Knight's Poems from Prison is funky fresh in recalling the extreme pain of rebirth.