Barry Jenkins' critically acclaimed new film Moonlight was released on the 21st. Based on the play In Moonlight Black Boys Look Blue, Jenkins takes viewers on an intimate look into the life of a young Black male growing up in Miami and unraveling his identity and sexuality. Moonlight is generating Oscar buzz and garnering praise from film and cultural critics alike. Checkout ongoing coverage from NPR here and here, Essence and the New York Times. Here's the trailer.

Brit Bennet's debut novel The Mothers, released earlier this month, takes readers on a complex tale of womanhood, friendship, and heartbreak. Bennet is already garnering recognition from writers like Jacqueline Woodson and Angela Flournoy, with a few comparisons to Ta-Nehisi Coates. Years in the making, Bennett wrote The Mothers while completing degrees at Stanford and Michigan. She is definitely one to watch. Ben East and Alexandra Alter review the new novel.

We're still hype over Luke Cage, the first "woke Black superhero show," and hope you are too! Here's a Luke Cage syllabus.

Truevine: Two Brothers, a Kidnapping, and a Mother’s Quest- A True Story of the Jim Crow South is a new book covering the lives of Willie and George Muse, African-American albino brothers kidnapped as children and forced to be sideshow acts in the circus. Beth Macy spent over two decades gathering stories about the brothers, the fight their mother launched to stop their exploitation, and their lives post-Jim Crow. Here's the NYT review.

Everyone's favorite "awkward" Black girl Issa Rae is back with a major HBO deal and a new series Insecure.

Directors Bob Hercules and Rita Coburn Whack recently premiered Maya Angelou: And Still I Rise. Running just under two hours, this documentary takes a long look at the incredible life of Maya Angelou, exploring her youth, relationships, and most importantly, her works. You will surely enjoy the many celebrity features throughout the documentary, but Hercules and Whack's in-depth exploration of Angelou's friendships with figures like Malcolm X and James Baldwin are an added bonus.

Faith Ringgold turned 86! She recently sat down with NPR to read from her award-winning 1991 children’s book Tar Beach.

The 2016 National Book Award Finalists have been announced.

Librarian Jamillah Gabriel is launching a Black literature subscription service. Each month subscribers will receive a specially curated box that includes a new book and other items relevant to Black culture. We'll post more information about the launch date when it becomes available.

Painter Kerry James Marshall is being celebrated at the Met Breuer—an extension of the renowned Metropolitan Museum of Art in New York, with his newest exhibit Mastry. From the exhibition overview: encompassing nearly 80 works—including 72 paintings—that span the artist's remarkable 35-year career, Mastry reveals Marshall's practice to be one that synthesizes a wide range of pictorial traditions to counter stereotypical representations of black people in society and reassert the place of the black figure within the canon of Western painting. 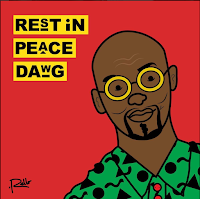